Shoveling snow with a regular shovel is very hard work, because you need to make great efforts to lift the snow and throw it aside. Choose the best electric snow shovel with us.

The use of mechanical snow shovels (they are also miracle shovels, super shovels) seriously reduces the complexity of snow removal, since it is enough to move the tool forward, and the shovel will remove the snow on the side of the road by itself .

What is a mechanical snow shovel

There is no clear standard for separating power shovels from snow blowers.

In industry , a mechanical shovel is understood as any device that carries bulk goods, including soil, from one place to another.

Therefore, we propose to consider any tools and mechanisms that fit the following criteria as mechanical shovels for snow removal : 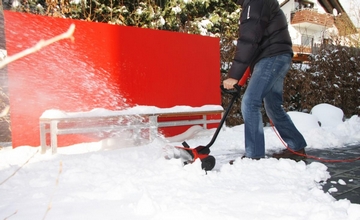 Only two types of devices fall under the criteria described in the previous section :

The auger shovel is a good combination of a conventional snow shovel and a two- or three-turn auger .

The principle of operation of this device is simple – when the shovel is pushed forward, the edges of the auger touch the ground and begin to rotate.

The rotating auger pushes the snow onto the roadside.

Such a device is not capable of throwing snow far away , therefore, to clear an area whose width is greater than the width of the shovel, you will have to spend a lot of effort .

After all, the auger squeezes out the snow at a distance of 5–30 centimeters from the shovel (depending on the pushing speed of the device), which means that as the shovel moves towards the thrown snow, the thickness of the snow cover will become more and more .

The use of a screw shovel is limited by the physical capabilities of the person using it. In addition, screw shovel is ill-suited for the cleaning of packed snow, because it is difficult to crumble into pieces that can move the auger.

Desire to reduce labor costs when clearing snow has led to the advent of electric shovels.

These tools are designed as simple as possible, so they only work in one mode .

The electric motor drives the auger through a gearbox , which accelerates the snow.

From the auger, the snow enters the rotary nozzle , through which it flies in the right direction.

The grip width of these devices is 20-30 centimeters , because it is limited by the engine power.

The more powerful the electric motor, the more snow it can accelerate to the required speeds for a certain period of time. An increase in the power of an electric motor is always associated with an increase in its mass , therefore, electric motors with a capacity of more than 2 kilowatts (usually from 700 watts to 1.2 kilowatts) are not used in such devices.

Nevertheless, there are models of electric snow shovels with a working width of up to 50 centimeters , the power of their motors is close to 2 kilowatts, and their mass exceeds 10 kilograms.

Devices of such low power are used to clean small areas . After all, this snow blower performs the same functions as an auger shovel, only with less effort from the one who uses it.

Unlike a conventional shovel, an electric shovel cannot remove deep or packed snow, because it cannot dig to different depths or remove snow in layers.

An attempt to remove snow cover more than 20-25 centimeters thick (depending on the model) will lead to the device being unable to throw off the snow, as it will bounce off the upper layers and fly in all directions. In addition, a unit of this type will quickly get stuck , because the snow located on top will impede its movement.

Removing packed snow with an electric shovel is not available because a plastic auger is used to reduce weight, which does not withstand heavy loads. Also, this unit is not suitable for cleaning wet snow, firstly, wet snow clogs the chute or is thrown out to a distance of less than a meter, and secondly, moisture can get into the contact between the extension cord and the plug of the device itself and cause a short circuit.

Read more about this problem in the article (Safety when working with snow blowers).

Electric snow shovels are used only for cleaning snow from flat surfaces , such as:

Attempting to clear snow from gravel or compacted soil will quickly break the auger.

After all, a plastic auger cannot withstand collisions with:

Some models are equipped with small wheels , which makes snow removal much easier , although it increases the weight of the unit.